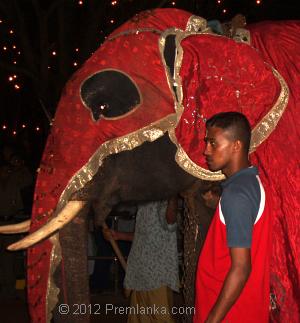 The sun can be very strong and temperatures can be high, especially at midday. Light comfortable loose fitting clothing is advised.

When swimming or on the beach it is wise to limit exposure of skin to the sun. It is advisable to wear a T-shirt and long trousers over a swimsuit for swimming. This type of clothing will also protect you against coral cuts when you are snorkelling. Aqua shoes are also advisable, so you can walk straight into the water.

There are few tourists in this part of Sri Lanka. Women guests may therefore feel more comfortable in longer skirts or dresses. When visiting Temples you are expected to wear conservative clothing or wrap a scarf around bare shoulders. The Temple staff can be particularly strict at sacred places such as the Temple of The Tooth at Kandy.

At Holy sites visitors are expected to remove shoes. It is also customary not to wear shoes in a Sri Lankan home — they are customarily left at the entrance. So to avoid perpetually undoing straps and laces a pair of comfortable flip flop style sandals makes life easier.

A long sleeved lightweight cotton shirt is useful protection from mosquitoes after sunset.

Weather & Monsoons (From the Guidebooks):

Sri Lanka has a tropical climate with distinct dry and wet seasons, affected by the South Asian Monsoon. The effects of the two phases of the monsoon in Sri Lanka are usually less than those in India and more northerly Asian countries. These two phases usually have opposite effects on the two parts of Sri Lanka: The south-west monsoon affects mostly the south, west, and central highlands of Sri Lanka; the north-east monsoon affects mostly the north and east.

South West (Yala) Monsoon between about May and August: The central highlands, south and west of Sri Lanka, including Dickwella, are normally wetter; Seas are also often rougher.

Higher winds and rougher seas mean that scuba diving around Dickwella is usually not advised between about late April and November. During these times, conditions in eastern and northern Sri Lanka may be suitable. Also, inshore snorkelling will be possible on calmer days.

Inter-Monsoonal Period during about October and November: Can bring rain and thunderstorms around Sri Lanka.

In southern Sri Lanka, winds are often high during October and November, making the seas rougher. The dry season here is from about December to March, although the wetter weather sometimes extends into January. The rain is interspersed with sunny periods and days.

North East (Maha) Monsoon between about October and January: The north and east of Sri Lanka are normally wetter. There, the dry season is from about May to September.

Transport and Getting Around:

We can organize to meet and collect you from the Airport. The drive to Dickwella takes from 4 to 6 hours according to traffic conditions and sight-seeing stops en route. The coast road from Colombo is beautiful; in many places it runs along the sea front.

The new airport at Hambantota has opened recently for some flights. The much improved coastal railway from Colombo has now reached this area.

Local buses run frequently and are very cheap but can be very crowded. 3-wheelers (as seen in various James Bond & Indiana Jones films set in Asia) are popular, cool taxis. Premlanka has its own which can be hired with the driver for excursions at reasonable prices.

For longer trips and safaris, private hire vans are a popular and comfortable means of transport. Premlanka will help you to arrange your Safari with a locally hired van if you wish to make overnight Safaris to the classic sites.

Internet cafes are available in Dickwella and most larger towns. Premlanka has a broadband link, available for guest usage.

Mobile phone coverage in Sri Lanka is fairly widespread & reliable. Local network pay-as-you-go SIM cards and top ups can be purchased in many of the local shops. Guests can receive calls on Premlanka Hotel's landline telephone.

Guests are welcome to bring their own "duty-free" and are able to "top up" at the local "wine shops."

We have a good supply of fresh limes for making fresh lime juice. We boil all your drinking water and water used for washing salads.

This area of Sri Lanka is largely Buddhist, with considerable numbers of Hindu, Muslim & Christian people; and some indigenous Veddah people. Although many people are devout, most are also tolerant of other faiths. Public religious festivals often include participants and symbols from other faiths.

Religious symbols are displayed at festivals, on buildings, and in homes. Like many local buildings, we have a small Buddhist shrine in Premlanka Hotel.

Note. The Swastika is actually an ancient symbol of auspicious knowledge, popular here long before it was adopted and misused by Nazi Germany. Expect to see this and other symbols displayed in Sri Lanka in their original contexts.

Premlanka Hotel now offers optional air-conditioning. Also, Premlanka has been designed with high ceilings and to be cooled naturally. Rooms have ceiling fans.

Premlanka Hotel bathrooms do not have hot water, but we are happy to heat water eg. for shaving. In our tropical climate, people normally prefer cool showers.

One bedroom is equipped with cooking facilities, for people who want to prepare their own meals.

There are varied and beautiful souvenirs many locally crafted e.g. batiks, lace, carved and painted masks. Shopping is surely an experience.

Jewellery shops abound and goldsmiths will often make jewellery items to order setting your own gem stones also bought locally. 22 carat gold is the standard. We can help you make your purchases.

Local markets make a very interesting and colourful visit. Dickwella's market day is Saturday. It abounds with all types of fruits and vegetables as well as many other goods. Well worth a visit. You can fill a shopping basket with pineapples, chillies, mangos, carrots etc. etc., for the grand outlay of about 2 GBP.

The currency is the Sri Lanka Rupee. It is wise to always have a selection of low and high value notes and coins, as particularly the smaller shops often do not have change for large value notes.

There are banks that change foreign currency notes and travellers cheques in the towns — Dickwella has at least three. In larger towns e.g. Colombo, Galle, there are also cash machines. Credit cards can be used but usually only at the more expensive shops that specialize in providing only for tourists. The exchange rate varies daily and also slightly from bank to bank (so it is worth checking the rate at different banks, as this can be time-consuming we can help you do this if you are with us on a trip). Many people find it more convenient to change currency notes such as Euros, Sterling Pounds or American Dollars. Although pick-pocketing is very rare, it is wise to ensure the safe keeping of your currency in especially crowded areas and on public transport.

Premlanka Hotel does not accept payments by credit or debit cards.

Up to date advice and inoculations should be available from your health service.

There is a well-regarded English-speaking doctor in Dickwella.